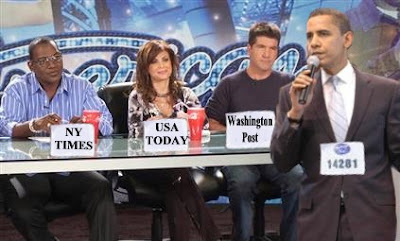 The other night our president gave a speech and then answered questions from the press. (there goes the whole 'Obama needs a teleprompter so his puppet masters can control him' meme.)

And what does the '4th estate' complain about? Not his policies, not his answers to their questions, they complain he didn't call on their MSM buddies. Jeebus, how shallow can these 'reporters' be?

A small sample of the outrage they exuded:

During President Obama's second East Room news conference, he took questions from 13 reporters over about an hour -- that's the same as during his first presser on Feb. 9.

But in quite a departure from the first presser -- and White House protocol -- Obama skipped over the nation's top newspapers. Indeed, there were no questions from the NY Times, Washington Post, Wall Street Journal or USA Today. That might not sit well with the already insecure newspaper industry.

Nobody gives a f*%k about your insecurities. We're dying over here!

[...]in his second prime-time news conference from the White House, it was Barack Obama the lecturer, a familiar character from early in the campaign. Placid and unsmiling, he was the professor in chief, offering familiar arguments in long paragraphs — often introduced with the phrase, “as I said before” — sounding like the teacher speaking in the stillness of a classroom where students are restlessly waiting for the ring of the bell.

Ohh, was the poor repoter bored because he couldn't understand the complexities of Obama's answers, after having them repeated? Or was his wittle feewings hurt?

[...]
But many probably wished "American Idol" hadn't been bumped from the lineup to make room for the President.

Ahh yes, the 'many probably' dodge because you don't have any facts. FYI, American Idol wasn't 'bumped', it was delayed.

[...]
He passed over reporters from The New York Times, The Wall Street Journal and the Los Angeles Times, opting instead to call on correspondents from Univision, Ebony magazine and Stars and Stripes.

And one final parting shot:

The President took a total of 13 questions, none of which were from a mainstream newspaper. After tapping the AP, then the networks, then the cablers, Obama turned his attention to more niche publications such as Stars & Stripes and Univision, arguably because he rightly guessed their questions would skew with topics he wanted to talk about i.e. the military and Mexico border issues.

The speech and press conference focused almost entirely on the economy! What the hell was this moron watching? I'm so glad you asked. He was probably with Eric Cantor watching the Britney Spears concert.

Hey fellas? Get over yourselves. It's not about you. We all heard what he said. And we don't need your spin or your ignorant badgering. We don't need no stinking badgers!

And to the moron who thinks he only called on 'niche' reporters?
That's not true. He called on the AP, NBC, ABC, CBS, Univision, Stars and Stripes, CNN, Ebony & AFP. Shoot, he even called on Faux News and the Washington Times! There was only so much time and he answered original questions and followups at length.

BTW, the military, Blacks and Latinos are not a niche in this country, they are Americans who have just as much right as you to ask questions of our president as the MSM does.

Cross posted at VidiotSpeak
Posted by The Sailor at 3:38 PM