If you'll only give me time. All the heartache that he left behind 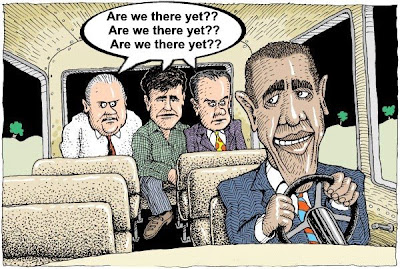 Well, I guess it's official. Obama's stimulus plan has failed to fix the bear market on Wall Street that he created. The Democrats have flushed us all down the toilet and John McCain can say "I told you so" as his plan of just carrying on Bush's policies would already have us out of this mess. Oh, you betcha!

Or, at least, that's what the talking heads on the right are hoping to convince Americans of.

In this instant-messaging, short attention span society we are in, we think all things can be accomplished and all problems resolved in a 24-hour time span, and anything that goes beyond that is a failure.

Although the conservative wing is trying hard to get the term "Obama's Bear Market" into the nation's lexicon, here is a dose of reality from today's Ryan Chittum column in the Columbia Journalism Review:

We’ve seen a meme spreading like a fungus in the press, mostly on the editorial/analysis/commentator side so far, blaming Barack Obama for stock market declines since Inauguration Day. Today, Drudge is pushing a Bloomberg story headlined “‘Obama Bear Market’ Punishes Investors as Dow Slumps.”

Um, no. Let’s nip this nonsense in the bud before it gets out of hand.

[ ... ] The Dow peaked in October of 2007. The bear market became official (meaning, stocks dropped 20 percent from their peak) in July. The markets started really falling off a cliff in September, when the Bush administration let Lehman fail, AIG and Merill had to be taken over, the Congress voted down the bailout, and Paulson had to switch teams from free marketeer to interventionist. Those events, remember, are what insured Obama’s election in the first place.
The TARP helped keep the boat from completely capsizing, but it’s more like bailing water does than fixing the actual hole in the bottom does. The economy, already in recession since December of 2007, went into freefall after the September crisis and has kept plunging since, shedding more than 600,000 jobs a month. Since the election, we’ve learned that Merrill Lynch blew a probably fatal hole in the side of Bank of America, Citigroup has been left for dead, and General Electric has been on the highway to hell—or the Pink Sheets, anyway. There’s much more in that vein if you have all day.
This is what Messrs. Obama, Geithner, and Summers inherited. Tough gig.
But let’s step even further back a bit. Dude’s been in office six weeks. The stock market is a notoriously impossible-to-predict-or-interpret animal. It goes where it may, for reasons the smartest traders can only guess at.
To put it another way, big secular declines in stocks take years to play out. The Great Depression stock crash didn’t hit bottom until 1933, four years after it started. It seems like the current one has been going on forever, but we’re still only at about 1930 or 1931.
[ ... ] “To be sure, the stock market’s crash long preceded Obama’s inauguration and election, and the economy he inherited from Bush is in a tailspin not seen for eighty years. And the extent to which Obama’s proposals have impacted the stock market is impossible to calculate.”
[ ... ] And get some perspective, as Ritholtz says:
"But to hold him responsible for a market collapse on day 41 of his Presidency — following 8 years of gross negligence and ruinous incompetency under the Bush regime — is simply too much stupidity for any damaged nation to bear."

To repeat... Obama has been President for 41 days. His plans, which the right have already deemed to be failures, are just starting now to be implemented. To expect him to turn everything around in the economy this quickly is kind of like slamming on the car brakes while flying down a rain-soaked highway at 100 mph and expect it to suddenly stop on a dime. Anyone who thinks that could happen aren't living in the real world with a grasp of just how deep this problem goes.

As Robin Williams once said, "Reality... what a concept."
Posted by Dancin' Dave at 8:37 AM