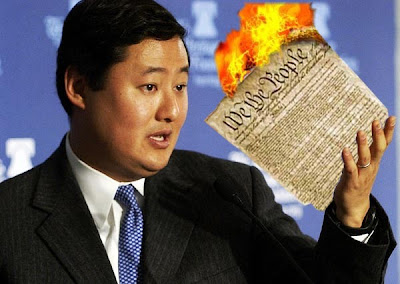 The number of major legal errors committed by Bush administration lawyers during the formulation of its early counterterrorism policies was far greater than previously known, according to internal Bush administration documents released for the first time by the Justice Department yesterday.
[...]
In one of the newly disclosed opinions, Justice Department appointee John Yoo argued that constitutional provisions ensuring free speech and barring warrantless searches could be disregarded by the president in wartime, allowing troops to storm a building if they suspected terrorists might be inside. In another, the department asserted that detainees could be transferred to countries known to commit human rights abuses so long as U.S. officials did not intentionally seek their torture.
[...]
Yoo's previously secret 37-page memo asserting that the president could authorize a broad use of military force to combat terrorist activities inside the United States was completed six weeks after the terrorist attacks. In it, Yoo said any terrorists in the United States could be treated like an invading army, justifying warrantless searches and the subordination of free speech and press rights if needed to "wage war successfully."

John Yoo is unrepentant. Yoo shouldn't be allowed to teach law, practice law, or remain free. He should get a fair trial here, with all the safeguards the Constitution affords, and then tried internationally with all the protections the ICC affords.

You can read the memos for yourself:

What is listed above is a blueprint for a dictatorship. And all of the Constitution, everything we fought for to establish our shining beacon, was eliminated by a 2nd rate lawyer, acting on behalf of a 3rd deciderer, by secret memos that 2/3rds of our government of 'checks and balances' had no input on. (Kids' version here.)

Attorney General Eric Holder "There is no reason we cannot wage an effective fight against those who have sworn to harm us while we respect our most honored constitutional traditions. We can never put the welfare of the American people at risk but we can also never choose actions that we know will weaken the legal and moral fiber of our nation."

Yep, what he said.

Cross posted at VidiotSpeak
(graphic by Dancin' Dave)
Posted by The Sailor at 3:44 PM