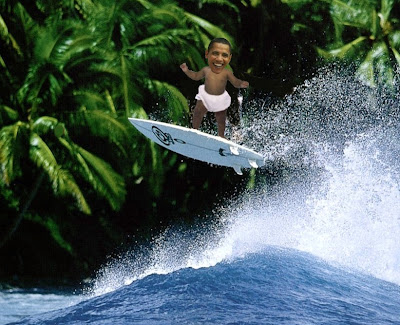 Don’t you just hate conspiracy theorists who base their whole argument not on what actual physical evidence has already been shown to debunk their claims, but on imagined “evidence” that they believe has been sinisterly hidden somewhere in a dark warehouse and “proof” of guilt is culled from the accused not denying its existence as vigorously as they demand?

The latest fringe nutjob group have been dubbed “the Birthers” - conservatives who believe Obama is ineligible to be president because of alleged questions surrounding his birth status.

Of course, as with any wingnuts, they aren’t deterred by having their claims soundly proven false with facts. For the record, officials in Hawaii declared last October that there was no doubt Obama was born in the state. Officials verified that the health department holds the commander in chief's original birth certificate.

Even Snopes.com has an entry proving this whole conspiracy rumor is just a bunch of desperate right-wing wishful thinking ca-ca:

Claim: A Certification of Live Birth document provided by the Obama campaign is a forgery.
~FALSE~
Origins: In the first half of 2008, a number of rumors swirling around about presidential candidate Barack Obama coalesced in the claim that he "refused to produce his birth records" because doing so would demonstrate some or all of those rumors to be true: that Barack Obama was "not African," that he was a Muslim with a middle name of Mohammed, that he wasn't born in the United States at all (and thus didn't qualify as a native-born citizen), etc. … As things turned out, when the Obama campaign made a copy of his Certification of Life Birth from the State of Hawaii available on the Internet in June 2008, it validated none of those rumors: The certificate shows his full name to be "Barack Hussein Obama II," it lists his father's race as "African" and his mother's as "Caucasian," it contains no information about religion, and it reports his birthplace as being Honolulu, Hawaii. A number of self-proclaimed experts immediately seized the opportunity to pronounce the certificate a forgery (even though none of them had actually seen the original, just a scanned image of it), picking on such specious details as minor variations from other Hawaii-issued certificates and the lack of an embossed seal and signature. (Some forgery claimants even maintained that the certificate was actually an altered version of one issued to Barack Obama's half-sister, Maya.) Aside from the inherent absurdity of such claims (i.e., that a major party presidential nominee would risk his entire candidacy on a fraud that could be uncovered simply by a check of state health records), the supposedly incriminating details don't pan out: the certificate is consistent with others issued in the same time and place, and the embossed seal and signature don't show through very well on the scanned front image made available on the Internet because they were applied to the back of the original document, not the front. Those who have actually touched and examined the original certificate have verified and documented that it bears all the elements of a valid certificate of live birth.

And if that isn’t proof enough (which for the buggy “Birthers” it isn’t), then how the heck do they explain this one:

A birth announcement for Barack Obama Jr. was also published in the Honolulu Advertiser on 13 August 1961, reporting a 4 August 1961 birth date for the child of Mr. and Mrs. Barack Obama:

Uhhh… so, let’s see… a couple in Africa have a baby in Kenya, and knowing that he’ll someday run for President of the United States contact a Honolulu newspaper to place a birth announcement inside to cover their tracks? Or maybe the Obama team built a time machine and went back and placed a birth notice in that 1961 newspaper? Um, how about there was a DIFFERENT Mr. and Mrs. Barack H. Obama who lived in Hawaii and just happened to give birth to a son on the same day? I’m sure the “Birthers” gave serious consideration to all those possibilities. As with any conspiracy theorists, the trick is not to uncover the truth, but instead to find any tidbits or twist things in order to support their original claims and shrug off any solid proof to the contrary as “forgeries”. They aren’t interested in the truth. Only in being “right”, regardless of how ridiculous and unsubstantiated their argument becomes. (And to some of the less ed-ju-ma-cated Birthers, yes, Hawaii was a part of the United States in 1961).

In October 2008, Hawaiian officials reported that they had personally verified the existence of Barack Obama's original birth certificate: State officials say there's no doubt Barack Obama was born in Hawaii. Health Department Director Dr. Chiyome Fukino says she and the registrar of vital statistics, Alvin Onaka, have personally verified that the health department holds Obama's original birth certificate. Fukino says that no state official, including Gov. Linda Lingle (a Republican), ever instructed that Obama's certificate be handled differently from any other. She says state law bars release of a certified birth certificate to anyone who does not have a tangible interest in it.

And a fringe group of wackos who are grasping at straws because their guy lost an election too soundly to have the Supreme Court install him anyway doesn’t constitute a ‘tangible” interest.

As the Republicans were so fond of saying during the Bush years “Your guy lost. Get over it”.
Posted by Dancin' Dave at 7:50 PM