How Ironic or Should I Say Moronic 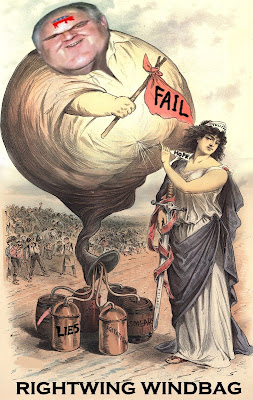 Moronic is probably better. According to Steve Benen at Political Animal a whole scurvy cast of wingnuts have joined Oxycontin Boy in the call to have President Obama's agenda and presidency fail.

Over the last few days, Tom DeLay, Rick Santorum, and Michelle Malkin have joined the Limbaugh-inspired group of conservatives who are publicly hoping that President Obama fails. Yesterday afternoon, RedState's Erick Erickson kept the ball rolling with an item headlined, "I Too Want Barack Obama to Fail," encouraging other conservatives to rally behind the campaign to undermine the president.

Correct me if I'm wrong, but weren't these the same people who ranted and raved long and loud just a few short years ago when some of us on the left had the audacity to question George Bush's litany of idiocy? If I remember correctly our patriotism was questioned and there were even calls for rounding us up and putting us in Gitmo or something even worse. How short the memories.

Not everything President Obama will do or wants to do is going to get my 100% stamp of approval. For one thing, he's a little to centrist for my taste. If I had my druthers we would have a socialistic revolution and not just nibble around the edges of social democracy. The U.S. and the world needs radical change and this calls for bold steps and not baby steps. For too long the U.S. and the world has been under the thumb of big business whether it be energy or finance. For too long we have spent on guns and not butter. For too long we have screwed the environment in the name of "progress" and destroyed our future and that of our children on wasteful and useless plastic junk made at the expense of third world labor and sustainablilty. We need radical change.

One good thing about all these calls for the failure of Obama is that we on the progressive left could not have wished for anything better to highlight the shallowness, insanity and downright idiocy of the right and with it the GOP than to see them rally around a campaign so antithetical to our history and meaning of what it is to be an American. Keep it up suckers and pretty soon the only people that will rally 'round your cause will be those so bereft of hope, courage and a belief in the power of the American dream that your cause will be relegated to the trash heap of history for the next century. You can sit around and wipe the snot off each others faces while the rest of us try and rebuild the world into a better place.

As Steve reminds us...

John Wayne, who was very conservative, was asked for his thoughts after JFK defeated Richard Nixon in 1960. "I didn't vote for him," Wayne said, "but he's my president, and I hope he does a good job."
It's such a simple and obvious sentiment. That it eludes so many conservatives is a genuine shame.

Posted by fallenmonk at 8:20 AM